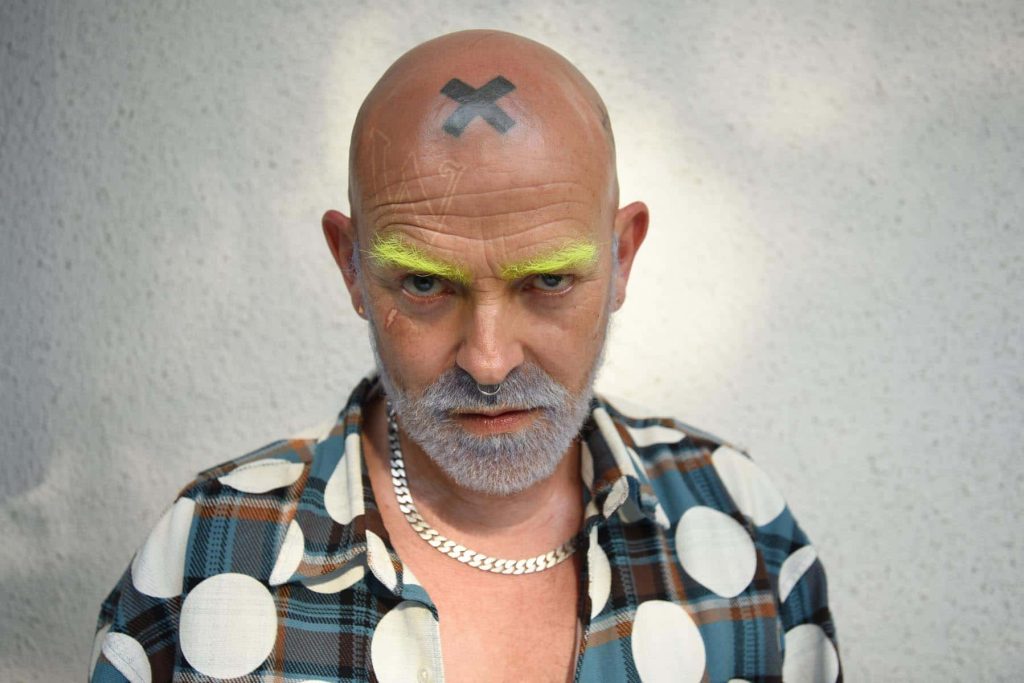 Influenced by punk rock and John Peel, the young Adam Tinley, as he was then, formed his first band The Stupid Babies when he was 11, living in the New Forest, south England.
Fast Product signed the primitive kiddie-punk tracks, released them on a sampler, and legendary alternative BBC Radio1 DJ John Peel started playing their endearingly twee song ‘Babysitters’ The Stupid Babies caused quite a stir, receiving positive write-ups in music mags like Smash Hits and Melody Maker, and Adam was off on his journey.
By 1986 Adam discovered “the 909 – my drum machine of choice,” he recalls. He started the band Diskord Datkord, with his older brother Mark and Jonny Slut. They released their only single in 1988, an electroid cover of ‘Identity’ by punk band X-Ray Spex. In the summer of 1988 Adam visited Ibiza and was blown away by the Balearic sets spun by DJs Alfredo and Pippi. It was then that the artist Adamski was born. In early 1989 Adamski was booked for his first solo gig. Bookings started flying in and he quickly catapulted into the upper echelons of the nascent rave scene. Within a few weeks Adamski was playing to 8,000 people and soon after released squiggly acid piano shuffler
‘N-R-G’. He achieved his childhood ambition of performing on Top Of The Pops, released ‘Live & Direct’ - an album cobbled together of various live recordings from raves. During his set at Sunrise Festival, the then unknown Seal gave a demo tape to Adamski’s flatmate at the time. Upon hearing Seal’s voice, Adam offered the instrumental of what turned out to be ‘Killer’. The track shot to No.1 in the UK in May 1990, and was a smash all across Europe as well as in the U.S. Decanting to L.A. the day after a triumphant Glastonbury performance on the Pyramid Stage, ‘Killer’ was then released on his second album, Dr. Adamski’s Musical Pharmacy.
1991 saw the release of Adamski’s third album, ‘Naughty’, followed up by ‘Adamski’s Thing’ a few years later. Throughout the late 90s Tinley shifted focus to his DJ career. He soon adopted a new moniker, Adam Sky, touring Europe, and making the odd UK appearance such as playing at seminal electroclash night Nag Nag Nag in London in 2002 – run by his old friend Jonny Slut.
In 2009 he found his way back to the UK to start his Futurewaltz project. Working in the 3/4 time signature re-energised Adamski. Tinley’s latest alter ego is cyberbilly SONNY ERIKSSON - a self-styled Teddy Boy Timelord armed with a laptop and a mean Gretsch guitar swaggering down the information superhighway to source the most rockin' elements from 1955-2025, fusing rockabilly and psychobilly styles with the hypnotic, strange and electronic sounds of today and beyond. 2019 marked the 30yr anniversary of Adamski’s seminal rave classic N-R-G and was celebrated with the release of seven up-cycled versions of the track on the EP ‘Re:NRGize”.
In 2020, this was followed up with FREE TO KILL AGAIN, featuring 10 new interpretations of his classic track ‘Killer' with guest features by Boy George, Nina Hagen, Adrian Sherwood, Mykki Blanco, as well as a number of exciting up and comers. June 03rd 2022 will see a release of the track Black Butterfly, featuring legendary house singer Robert Owens. The track is a tribute to Mina Smallman’s daughters Nicole and Bibaa. All proceeds will be donated to the charity Million Women Rise. Remixes by Captain Mustache, Leeroy Thornhil (The Prodigy), Mr. C (Superfreq), and Shadow Child. Besides Tinley's other projects, producer and DJ Adamski of course still brings you bastardized club classics from the birth of the rave era until today and beyond...